Geographical Location: Sri Lanka is an island in the Indian Ocean lying off the southeastern tip of the Indian subcontinent. It lies between latitudes 5° 55' and 9° 55' north of the equator and between the eastern longitudes 79° 42' and 81° 52'. The Palk Strait and Gulf of Mannar separate Sri Lanka from India. The Arabian Sea lies to the west, the Bay of Bengal to the northeast, and the Indian Ocean to the south.

The Land: The total land area of Sri Lanka is 65,610 sq. km. and is astonishingly varied. A length of 435 km (270 miles) North to South and breadth of 240 km (150 miles) East to West encompass beautiful tropical beaches, verdant vegetation, ancient monuments and a thousand delights to please all tastes. The land of Sri Lanka can be divided into three geographic zones that correspond to elevation: the central highlands, the lowland plains, and the coastal belt. The central mountainous mass somewhat south of the centre, include numerous mountains, plateaus, and valleys, surrounded by broad plains. Pidurutalagala, the highest point in Sri Lanka, rises 2,524 m (8,281 ft) in the central highlands. In contrast, the elevation of the surrounding plains ranges from 90 m (300 ft) to sea level. The plains are broadest in the north and north central areas. A number of rivers starting from the Central Highlands flow to the sea in a Radial Pattern. The Mahaveli is the longest river (331 km). Bambarakanda (240 m) is the highest water fall; one of the scenic beauties of Sri Lanka. The coastal belt rises about 30 m (about 100 ft) above sea level. Palm fringed beaches surround the island and the coastline extends a length of about 1,300 km (about 830 mi). The sea temperature rarely falls below 27°C. Lagoons, sand beaches, sand dunes, and marshes predominate along the coast, although steep rocky cliffs are found in the northeast and southwest. 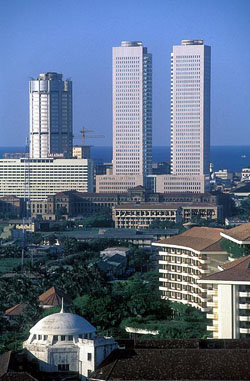 Economy: Agriculture is the largest sector of the economy in terms of employment, but manufacturing, especially in the garment industry, generates the majority of export earnings.

Currency Unit: Sri Lankan Rupee (A Rupee is divided into One hundred Cents)

Climate and Seasons: In the lowlands the climate is typically tropical with an average temperature of 27°C in Colombo. In the higher elevations it can be quite cool with temperatures going down to 16°C at an altitude of nearly 2,000 metres. Bright, sunny warm days are the rule and are common even during the height of the monsoon - climatically Sri Lanka has no off season. The south west monsoon brings rain mainly from May to July to the western, southern and central regions of the island, while the north-east monsoon rains occur in the northern and eastern regions in December and January.

Population: Only 21.5% of the population lives in the urban areas while 72.2% is in rural areas. 6.3% is living in the estates. Population growth is 1.5% (mid year 2002), which is well below that of most countries in the South Asia region. The reasons for the low population growth rates are the demographic transition, successful family planning, high literacy rates and improvements in other socio-economic conditions.

Language and Religion: Sinhala and Tamil are official languages in Sri Lanka. Sinhala is the language of the majority of Singhalese people, Tamil is mainly spoken by the Tamil minority. English is the main link language of Sri Lanka with the rest of the world. Place names and sign-boards on buses and trains are usually in all three languages. 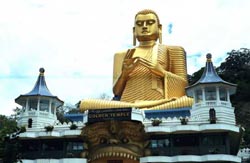 Although Sri Lanka is a multi-religious country, Buddhists constitute the majority with 69.3%. Other religious groups are Hindus 15.5%, Muslims 7.6% and Christians 7.5%. Sri Lanka is a land of religious freedom and tolerance.

Wherever you travel you will come across a Buddhist Temple or Dagaba, a Hindu Kovil, a Christian Church or a Mosque, each with its own distinctive architecture.

Literacy: Sri Lanka's literacy rate (overall) is estimated as 90.1%; one of the highest in Asia.

The Democratic Socialist Republic of Sri Lanka is a free, independent and sovereign nation. It has a democratic political system, with a directly elected president by universal franchise as head of state as well as a Parliament directly elected by universal franchise on a proportional representation basis. Legislative power is exercised by Parliament headed by the Prime Minister and a Cabinet of Ministers, while executive power of the people, including defence, is exercised by the President. A system of administration through provincial councils and divisional councils (Pradeshiya Sabha) was introduced in 1988.