State Minister for Regional Co-operation Tharaka Balasuriya and Foreign Secretary Admiral Prof. Jayanath Colombage were featured on Ada Derana 24 yesterday (04), with Mahieash Johnney for a special coverage on “US Election live, on the Road to the White House”. 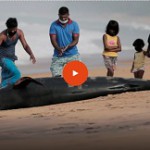 Between 100 and 120 pilot whales were stranded on the Sri Lankan coast. The police, the navy and many volunteers helped save most of the animals - despite the corona curfew.

Find more under this LINK 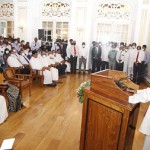 Foreign Minister Dinesh Gunawardena assumed duties at the Foreign Ministry on Monday 17 August 2020. Minister Gunawardena was received by Foreign Secretary Admiral Prof. Jayanath Colombage and other senior officials upon his arrival at the Ministry. Following multi-religious observances, the Minister officially assumed duties. Later, addressing the staff, the Foreign Minister remarked that the Government is ready to rise up to the new challenges with the mandate given by the people of Sri Lanka. The Minister stressed that with a strong government in office and its non-aligned and friendly foreign policy, it is envisioned to bring about a number of key changes beneficial to the country. He also called upon the Sri Lankans overseas to join hands with the government in this endeavour. 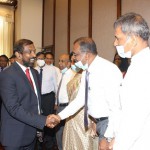 Tech Giant HCL has rapidly expanded their plans to create over 1,500 new local employment opportunities for both freshers and experienced professionals, within the first 18 months of kick-starting its operations from its office in Colombo, having initially signed up with Sri Lanka’s Board of Investment to set up a 500 seat service delivery center in February this year.  This move by a global ICT leader in a COVID impacted global economy highlights Sri Lanka as an emerging destination of choice for the global tech market.