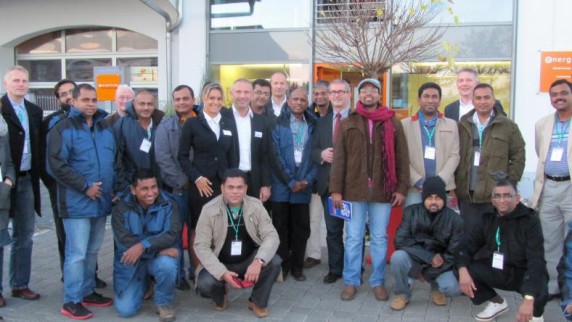 Balzhausen is approximately 8,000 kilometres away from their tropical homeland. Wrapped up in warm jackets the members of a delegation from the distant Sri Lanka get off the bus in front of the company Energeticum Energiesteme in Balzhausen. The delegation is formed by 15 entrepreneurs from the energy sector and two representatives of the state-run ministry of energy in Sri Lanka. The guests were welcomed by CEO Robert Specht, his employees and Balzhausen’s Mayor Gerhard Glogger.

The guests from Sri Lanka had already been travelling for one week through Germany in order to gather information from various companies on ways of producing energy. At Energeticum in Balzhausen, the visitors were interested in information about the generation of energy through photovoltaic systems and especially about storing the energy that was produced in this way. The visit was arranged by the Training Centre of the Bavarian Economy (bfz) in Hof, whose project coordinator, Jens Kayser, had visited with the Sri Lankan guests companies active in the energy sector. In Sri Lanka, energy was mainly generated by hydropower, he said. Since the capacity of these had almost reached its limits, they were searching now for alternatives.

The exchange is to be intensified

Chief Operating Officer of the company, Dimo Wijith Pushpawela, a partner company of Siemens in Colombo , stressed that there was already a large exchange on import and export between Germany and Sri Lanka. It should be further increased, he said. General agent at Energeticum, Werner Schneider, explained the company. He said that since the founding of the company in 2004 over 2,400 photovoltaic systems had been installed. Therefore, Energeticum was one of the leading companies in the region. Schneider said that about 450-500 solar power facilities were built per year. In the meantime, the company has specialised in storing of energy with the solar battery Prosol. Diversification made it possible for the company to cope with difficult current situation on the photovoltaic sector, Schneider said. While many companies went into insolvency, Energeticum was still further growing, he said. This year alone, ten new employees were hired. What began in 2004 with just one employee has now grown into a company with over 50 employees. Today, Energeticum rests on three pillars: solar energy, electronics and heating systems.

What concerned him, said Schneider, was the excess of energy and its storage. Here the solar battery comes into play. The battery is about the size of a refrigerator. The control of the system runs through the "energy manager”. First, the electricity generated by photovoltaic plant is consumed in the house. Once all energy demands a met, the battery is charged. If the battery is full, additional consuming devices are supplied with electricity. Once everything in the house is serviced, the excess is fed into the grid. The battery had a life of 20 or more years, Schneider said. Sri Lanka wants to rely more on this impressive German technology.