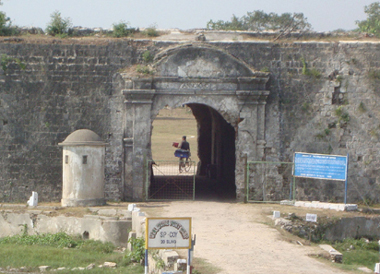 The Jaffna Fort restoration work is continuing speedily, and once completed, will add to the country's unique cultural treasures and heritage sites. The restoration work is funded by the Dutch government. National Heritage and Archaeological Director General Senerath Dissanayake said around 60 percent of the restoration work has been completed. "Individuals visiting the Fort can see the full structure of the Fort very clearly. However the Dutch Church destroyed following terrorist activities is in a dilapidated state. A decision has to be taken to restore all historical sites damaged by the war," he said.

Dissanayake said one of the unique landmarks being restored is Queens House. "It will be completed in the near future. The Jaffna Fort is a main tourist attraction. Local tourists also make a stop over at Jaffna Fort. The Jaffna Fort is known for its archaeological and historical significance. The Fort was built during the Portuguese era in 1618, under the command of Philip de Olivera," he said.

"The Fort was captured by the Dutch in 1658 under Raiclop Van Goins who effected improvements. However, at present, visitors get the impression of an original Dutch building. The Fort houses a number of archaeological monuments with historic value. The Jaffna Fort was under the control of the LTTE between 1986 and 1995. It was recaptured in 1995 following a 50-day siege during Operation Riviresa," Dissanayake said. He said due to the war, the Fort was no longer what it used to be.

"The dam and the interior buildings were heavily damaged. According to Archaeological Department officers, when they built it first, the Portuguese gave it a square shape. Thereafter, the Dutch reconstructed the Fort in the shape of a star with five bastions. The British too made use of the Fort even though they did not make any special changes to the Dutch style of the Fort," Dissanayake said. "After eradicating terrorism, the renovation programme of the Jaffna Fort was initiated in 2009. Numerous antiques of ancient value were found in the Jaffna Fort site.

Chinese and Roman coins and urns are evidence of a rich history. Gajalakshmee coins of the Anuradhapura era were also found at the site," Dissanayake said. He said the department commenced the construction of the inner walls as well as Queen's House building. The department plans to open a mini chamber inside a tunnel of Jaffna Fort to serve as rest and recreation room for visitors, the Archaeological Director General said. He said according to historic evidence, in 1795 the Fort was taken over by the British, and remained a British garrison till 1948. Jaffna Fort is considered as the only military Fort in the country. The Army provided labour to clear the Jaffna Fort canal. Jaffna University Archaeological Department students too work on the construction of the Jaffna Fort.