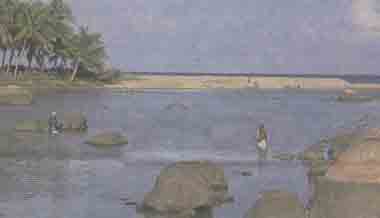 Slowly the shades of the coconut trees become visible in front of the skyline getting alight in a milky way. Sidampalam, the old man, which has been responsible for the greenery in the small resort Stardust Beach near Pottuvil at the Southern East Coast, clears the leaves and blossoms. At the East Coast of Sri Lanka, a new day is beginning.

It is a calming view, finally again. This hotel mirrors the fate of the East Coast like no other. Eight years ago, at Boxing Day 2004, the Dane Per Goodman, the founder and owner of the most well-liked surfer spot at Arugam Bay, became a victim of the Tsunami – one of more than 35 000 in Sri Lanka. The bungalows and cabanas were mostly destroyed. But still, Per's widow Merete Scheller was not discouraged. Together with her team, mixed like the Tamil, Singhalese and Muslim villages at the East Coast, she reconstructed the resort.

A mode of new beginning in Sri Lanka – finally also at the East Coast, which had been a secret spot for all beach lovers twenty years ago. Before it could develop into a boom, the war between the government troops and Tamil rebels destroyed all flowery dreams. Now, two years after the end of fighting, claims are fixed between Trincomalee and Pottuvil. German travel organizers have increased their offers heavily, and the big hotel chains from Colombo have renovated their old houses like the Nilaveli Beach or the Chaaya Blu (former Club Oceanic), and at many places the caterpillars and cranes have appeared.

To the South, at the formerly desperate dream beaches of Passekudah, Kalkudah and batticaloa, where the fish can be heard "singing" in the evenings without wind, new resorts have been constructed. Cheap and copy guesthouses like Monis Guesthouse, luxurious ones like the Maalu Maahi Resort, both near Passejudah, or the familiar Deep Sea Resort in "Batti", as regular guest call the little village of Batticaloa.

Pottuvil in the South is characterized by its Muslim population. Like in Trincomalee, the northern counterpoint at the East Coast, some hotels have had guests even during the hard times, most of all development helpers and mine clearing workers. They have mostly left, and the places have changed. Thus in Pottuvil the goats and cows have not left the beaches of the neighbourhood, but the city view, and sand roads have become concrete roads.

At the beach in front of the Stardust Resort, a multicultural team prepares a barbecue. Lobster, Tiger Prawns, fresh fish from the grill. Nilam prays to Allah, that no rain will be coming, Samath, chef cook and Buddhist, has put a flower in front of the statue of the Enlightened, and Nageswari, the Hindu woman, who is responsible for the cleanliness of the rooms, has been sweeping the floor.