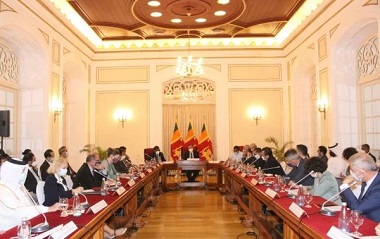 At the outset the Minister appreciated his first opportunity to meet with the entire diplomatic corps collectively following his assumption of duties as Foreign Minister some weeks ago. Due to the previously prevailing COVID-19 situation, such a meeting could not take place earlier as he would have wished, the Minister stated. The objective of the meeting was to cordially brief the diplomatic community on recent developments of interest to them.

The Minister stated that he was pleased to report that the COVID-19 situation in the country had improved, following a very successful vaccination effort. Despite severe challenges, over 70% of the population has now been fully vaccinated allowing for the gradual opening up of the country. The Minister sought the cooperation of the diplomatic community in the resumption of tourism and economic activity. The Minister expressed his appreciation to the diplomatic community for their support and assistance during the COVID-19 crisis including to all UN agencies as well as donors and Colombo–based multilateral financial institutions.

Minister Peiris also briefed the diplomatic community on his recent overseas engagements, including at the UN Human Rights Council in Geneva and during his visit to New York, accompanying the President when he addressed the United Nations General Assembly. At the UNGA, Sri Lanka stood in solidarity with global efforts to address pressing issues which required a collective approach from all countries big and small. In the next major international engagement which will be the COP 26 in Glasgow where the Minister will accompany the President, Sri Lanka as a climate vulnerable country, will further reiterate its commitments in this regard.

The Minister also recalled his statement to the 48th session of the UN Human Rights Council following the presentation of the Oral update on Sri Lanka by the High Commissioner for Human Rights, where he outlined Sri Lanka’s ongoing cooperation with the Council as well as the progress made on reconciliation and human rights through domestic institutions. Further updating the diplomatic community in this regard, he stated that Sri Lanka is open in acknowledging the challenges faced and will engage in candid discussions in this regard, both domestically with representatives of civil society as well as with the our international partners including the UN. However Sri Lanka rejects the establishment of an external mechanism when domestic processes were ongoing. The Minister also shared information relating to progress on the process of Constitutional reform and the Provincial Council elections.

The Minister further referred to the recent visits from the EU, in the context of the Joint Commission as well as to review the implementation of the GSP plus. The Minister expressed satisfaction that the discussions were held in a cordial manner and that officials have taken note of outstanding matters. The Minister recalled that the continuation of GSP plus is vital for the Sri Lankan economy, not only in the apparel sector, but also in other areas of bilateral trade. He stated that Sri Lanka’s efforts to achieve the SDGs as well as uplift the lives of our people require cooperation from all our international partners. COVID-19 dealt a significant blow to our plans and we need to recover.