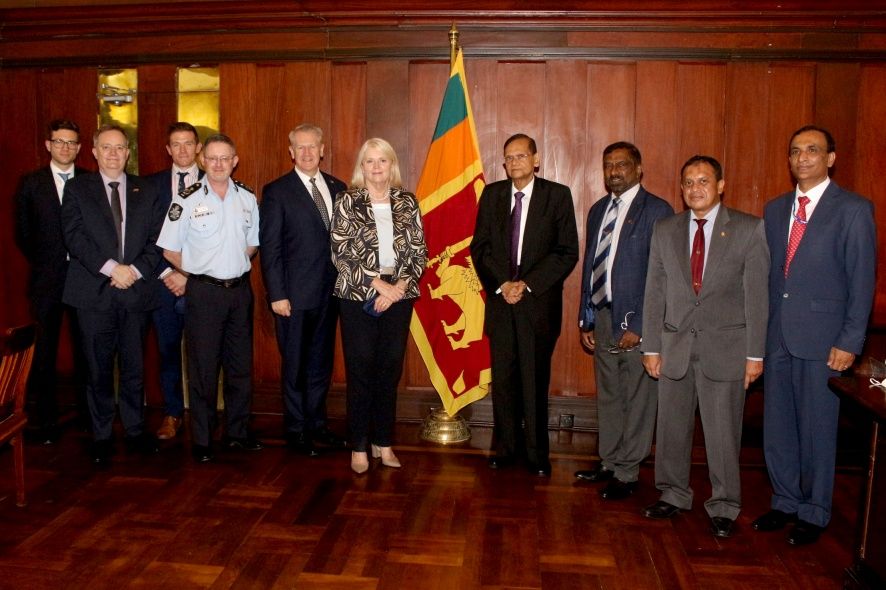 The Australian Minister for Home Affairs Karen Andrews met Foreign Minister Prof. G.L. Peiris on 20 December 2021 at the Foreign Ministry during her official visit to Sri Lanka and discussed avenues for enhanced cooperation on a broad spectrum of areas.

The Foreign Minister expressed satisfaction with Australia’s significant involvement in preventing people smuggling and transnational crimes in Sri Lanka as well as in the region. The Minister reiterated that the vibrant partnership between Australia and Sri Lanka exemplified the highly effective and successful collaboration between the two countries in the field of preventing people smuggling and border security matters.

Minister Peiris also apprised the visiting Minister on the ongoing review of policies and laws, including the Prevention of Terrorism Act (PTA) in order to address the residual issues still remaining after the end of internal armed conflicts in 2009. Among the measures undertaken by the Government include the setting up of the Office of Missing Persons, Office for Reparations, the Office of National Unity and Reconciliation (ONUR), SDG 16 Council and the Human Rights Commission of Sri Lanka.

During Minister Andrews’ visit, the Sri Lanka Border Risk Assessment Centre (BRAC) at the Department of Immigration and Emigration was ceremonially inaugurated jointly with her Sri Lankan counterpart, Minister Chamal Rajapaksa at the Department of Immigration and Emigration. Earlier in the day, both Ministers also signed the Memorandum of Understanding of Return and Readmission of Persons between Sri Lanka and Australia at the State Ministry of Home Affairs.

Minister also expressed keen interest in the proposed establishment of a Transshipment Hub in Sri Lanka to route Australian products through Sri Lanka to the other markets which would immensely benefit the Sri Lanka economy.

Furthermore, both Ministers also agreed to hold the next session of the Joint Working Group (JWG) on People Smuggling and other Transnational Crime in Sri Lanka in the coming months and agreed to work together closely to further enhance the cordial relations between Sri Lanka and Australia.

Minister Andews and Minister Peiris agreed on the need to celebrate the 75th anniversary of the establishment of diplomatic relations between the two countries next year, 2022 in a befitting manner.