A new era has dawned in Sri Lanka. Peace has been consolidated after a bloody 30-year civil conflict. The country’s 67-year old democracy has been reinforced after a dramatic, peaceful and people-led political transition in January 2015.

We’re prioritizing business-friendly policies so that we can take advantage of today’s peace to build a thriving economy.

Sri Lanka is strategically placed to benefit from a changing global marketplace. We are equidistant between Europe and Far East on the major East-West shipping lanes. We have easy access to lucrative Middle Eastern markets and rising African markets, while the growth engine that is India lies just 20 miles away. The latter will play an increasingly important role as we broaden the Indo-Sri Lanka Free Trade Agreement.

I see Sri Lanka’s economic future as a services hub; a niche manufacturing destination to produce goods which plug into regional and global value chains, particularly light engineering; and a location for high-value agricultural products such as fruits, vegetables and dairy, both to service the rapidly growing tourism sector and for exports, especially, to the Middle Eastern and Indian markets.

To take advantage of these opportunities, we need to tackle two major social challenges. First, we need to promote reconciliation, rehabilitation and reconstruction in the areas afflicted by the recent conflict. Second, we need to bolster Sri Lanka’s democracy, which we’re achieving by, among other things, reasserting the independence of the judiciary, combating bribery with the UN Convention Against Corruption and allowing a free and vibrant press to flourish.

This will create the right context for economic development. It is my intention to fast-track reform and accelerate our growth to meet the rising aspirations of Sri Lanka’s well-educated people.

My vision is for the private sector to be the engine of growth, with exports and FDI playing vital roles. We are making a concerted effort to improve investment policies, the ease of doing business, trade policy and trade facilitation. 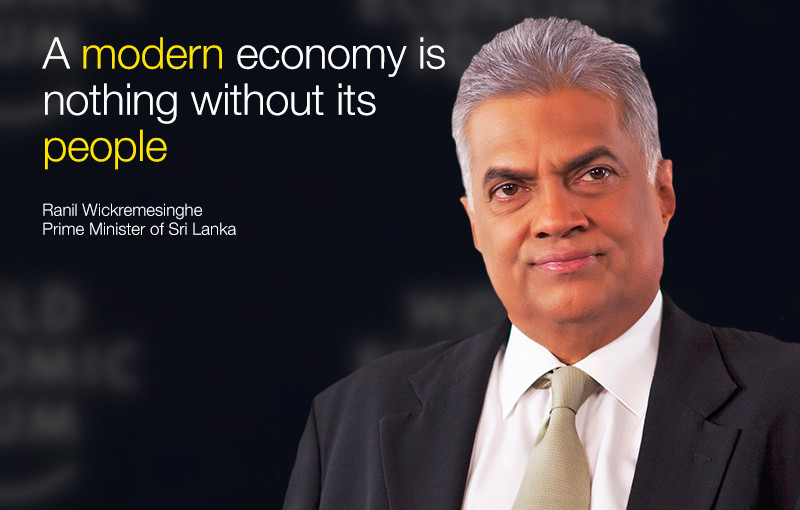 A new vision of urban development

A tangible example of what we are working towards is the Western Province Megapolis Project. This development will cover several cities in the area around Colombo, our capital, in the South West of the country. There will be a financial district, as well as zones dedicated to logistics, industry, IT and entertainment. By 2030, the project area is expected to have a population of 8.5 million people and per capita income of US$ 30,000 (compared with today’s national per capita income of US$3,800).

There will be a major role for the private sector as well as public/private partnerships in implementing this project in particular, as well as laying the groundwork for the future of economy in general. I see industrialization and urbanization as key drivers of modernization. We will create 45 new Industrial Parks around the country which will be developed and managed by the private sector. Five second-tier cities will also be developed, as part of our programme to promote urbanization through Sri Lanka’s regions.

A modern economy is nothing without its people. Sri Lanka is upgrading education, training and skills to create the human resource base which supports a competitive and rapidly modernizing economy. By forming the right policies to support small and medium-sized businesses (SMEs) and agriculture we wish to see Sri Lanka’s new prosperity shared among its people, in line with the newly agreed sustainable development goals.

Finally, let me address Sri Lanka’s role in today’s world. Sri Lanka is also well placed to play a constructive role in addressing the pressing international issues of the day, such as terrorism, climate change, migration and strengthening democratic values.

Sri Lanka’s cultural traditions are such that respect for the environment is embedded in the psyche of our people. This creates a groundswell of public opinion in favour of sustainable development. In the wake of the Paris Climate Conference, I would like to point out that Sri Lanka is committed to achieving 20% renewable energy usage by 2030, over and above the current 35% of hydropower. Environmental sustainability is central to the country’s development plans. At the same time, Sri Lanka is ready to be a constructive partner in global climate negotiations.

Sri Lanka has also had direct experience with various aspects of international migration. Between 1.5 mn and 2mn Sri Lankans (7.5% -10% of the population) work as temporary migrants and the country has considerable experience in dealing with both the opportunities and challenges associated with it. Sri Lanka has also had exposure to the problems of asylum-seekers and economic migrants during the conflict. It is well placed to share lessons learnt in international fora.

The upcoming World Economic Forum 2016 in Davos in late January affords me the opportunity to showcase these landmark changes in Sri Lanka. Our message to all, is that in an international environment that is insecure and volatile, Sri Lanka has peace, has consolidated democracy and revived the economy. It now stands ready for takeoff and to play its full role as a responsible member of the global community of nations.

Author: Ranil Wickremesinghe is Prime Minister of Sri Lanka. He is participating in the World Economic Forum’s Annual Meeting in Davos.