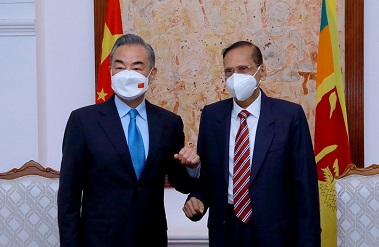 Foreign Minister Prof. G.L. Peiris has highlighted the warm and special relationship and the multi-faceted nature of the partnership between Sri Lanka and China in his opening remarks at the bilateral meeting with the State Councillor and Minister of Foreign Affairs of the People’s Republic of China Wang Yi held at Temple Trees on 9 January, 2022.

Foreign Minister Wang Yi is on a brief official visit to Sri Lanka to launch the celebrations marking the 70th anniversary of the historic Rubber-Rice Pact and the 65th anniversary of establishment of diplomatic relations between Sri Lanka and China.

Speaking further Foreign Minister Peiris stated that whenever Sri Lanka faced difficulties, support was always forthcoming from China in the fullest measure. In this context, the Minister expressed sincere thanks and profound appreciation to Foreign Minister Wang Yi for China’s spontaneous and generous support in the national vaccination drive to combat the COVID-19 pandemic, including the donation of 3 million doses of vaccine. Moreover, the timely assistance from China during the current economic situation in the country by affording the facility of a US$ 1.5 billion currency swap with the Central Bank of Sri Lanka, has helped to boost the country’s currency reserves. This has further reinforced the abiding friendship and mutual trust between the two countries.

During the bilateral talks, other matters of bilateral interest were also discussed, including further support for the ongoing vaccination programme, attracting investments from China to the Colombo Port City and the Hambantota Industrial Zone, increasing tourism from China to Sri Lanka, enhancing Sri Lankan exports to China and promoting cultural cooperation, especially in fostering Buddhist ties between the two nations.

State Councillor and Foreign Minister of China warmly reciprocated the sentiments of his Sri Lankan counterpart and stated that China regards Sri Lanka as a time-tested friend and thanked Sri Lanka for the exceptional gesture in issuing a special commemorative coin last year to mark the centenary of the Communist Party of China. He hailed the Rubber-Rice Pact signed in 1952 as a historic landmark in bilateral relations. He also highlighted the strong and consistent support by both countries for each other at various international fora over the years.

After the discussions, the two delegations signed the following Agreements, in the presence of Prime Minister Mahinda Rajapaksa and the two Foreign Ministers: