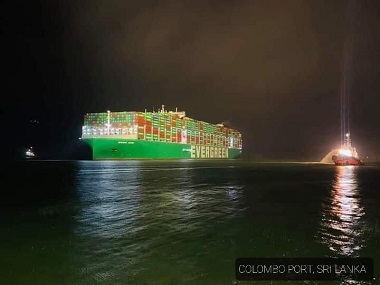 The world’s biggest container ship, the Ever Ace docked at the Colombo Port on Tuesday (October 05) on the return of her maiden voyage Evergreen’s Ever Ace is the first in the line’s 23,992 TEU class container ships. The A-type vessel is around 400 m in length and 61.5 m wide, has a design draft of 14.5 m and can cruise at speeds up to 22.6 knots.

With a nominal carrying capacity of 23,992 TEU, Ever Ace is one of the
largest container ships in the world. It was delivered on 28 July and deployed on Evergreen Line’s CEM service in Asia-Europe trade, also calling at Qingdao, Shanghai, Ningbo, Taipei Port, Yantian, Rotterdam, Hamburg and Felixstowe on her maiden voyage