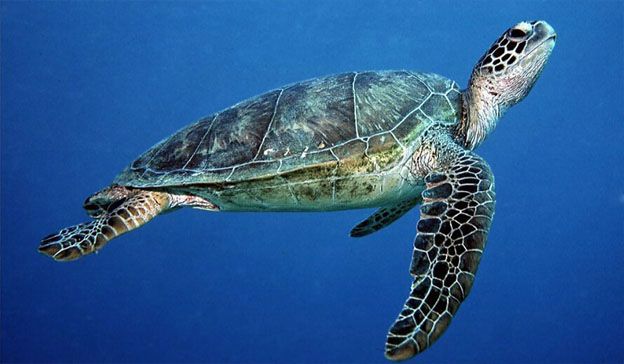 Today, we are sharing with you information about Sea Turtles visiting Sri Lankan shores as a breeding ground. They are the Green Turtle (Chelonia mydas), Hawksbill Turtle (Eretmochelys imbricata), Olive Ridley (Lepidochelys olivacea), Loggerhead (Caretta caretta) and Leatherback (Dermochelys coriacea). The sea turtles are called Kesbawa in Sinhala and Amai in Tamil.

The Green Turtle is the most commonly found turtle in Sri Lanka. They are also found in the Indian, Pacific and Atlantic Oceans. Luckily this practice is less common today. Young Green Turtles are mainly carnivores. Adults however are herbivores, feeding only on marine vegetation with the help of their finely serrated jaws.

The critically endangered Hawksbill Turtle is rarer than the Green Turtle. It is also much smaller, reaching a maximum length of 90cm and weighing 50-70kg.

The Hawksbill gets its English name from its narrow head and bird-like beak, which is used to catch animals hiding in small crevices. It is a regular visitor to Sri Lanka and other tropical and subtropical waters. Although one of the smaller species of sea turtle, it is renowned for its beautiful shell, which is made up of 13 symmetrical pieces and is very colourful.

The Loggerhead Turtle is rare in Sri Lanka and is more commonly found on the East Coast of America. They are usually red and brown in colour and as its name suggests, is easily identifiable because of its large head!

It grows to a maximum size of 1m and weighs 170-200kg. They are primarily carnivores and its large muscular jaws are ideal for crushing molluscs and crustaceans

This turtle is endangered because the population depends on the security of a small number of beaches found in the Indian, Pacific and Atlantic Oceans.

The smallest of the sea turtles and one of the two species of ridley turtle, the Olive Ridley reaches a maximum size of 65cm and weighs 35-45kg. It is named after its olive/rust coloured shell.

Olive Ridley Turtles nest yearly, and many lay their eggs on Kosgoda Beach, depositing more than 150 at one time. They are omnivores, eating crustaceans, fish and some marine vegetation.

This critically endangered turtle is the largest of the 5 species and is a rare find in Sri Lanka. It remains on the brink of extinction.

It is easily identifiable due to its long front flippers and unique black and white stripy shell - its carapace is in fact a layer of thin, tough, rubbery skin peppered with thousands of bone plates giving it a leathery appearance. It is in fact the only sea turtle that lacks a hard shell!

In addition, they have a unique blood circulatory system for a cold-blooded reptile which means they are able to keep their blood warm even in cold waters using metabolic heat from their muscle activity.

The Leatherback reaches a maximum length of 3m and a weight of 750kg. Their unique flexible carapace and its seven ridges enable them to dive to depths of 1500m in search of their favourite food, the jellyfish!

Around 5 Leatherback Turtles are known to nest at Kosgoda Beach each year.